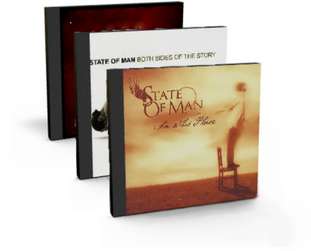 You can now download my past discography with my former rock band, State of Man (formerly JAD), free when you simply hit the

icon in the album players below.

Once you hit the

icon, just opt-in via the new window that comes up and the album download will automatically begin. Come back to this window and hit the

icon again to download the next album you want.

Finally, check out the multiple videos and background info on State of Man below the albums.  Enjoy!

BOTH SIDES OF THE STORY

BACKGROUND ON STATE OF MAN / JaD

In case you haven’t heard of JaD or State of Man, this was the independent rock band that scored a top 10 Billboard single while touring the world on our own record label. Download the entire discography above and check out some of the crazy State of Man antics around the world on YouTube here:

The band formed on New Year’s Eve, 1999, under the name JaD (pronounced “jade”) as a Hard Rock band and later changed the name to State of Man when we began writing more top 40 style Rock songs. Once my son was born and the economy took a turn in 2009, I stopped touring with the band to stay home with my family and we (the band) eventually disbanded.

I spoke to James Beale, the bass player, recently and we decided to give the music away since a lot of people have been requesting where to buy it.

I hope you enjoy the music and, if you haven’t already, don’t forget to check out my debut solo album, “Limitless Love & Light,” and my latest album, “Moment to Moment (live)” here!