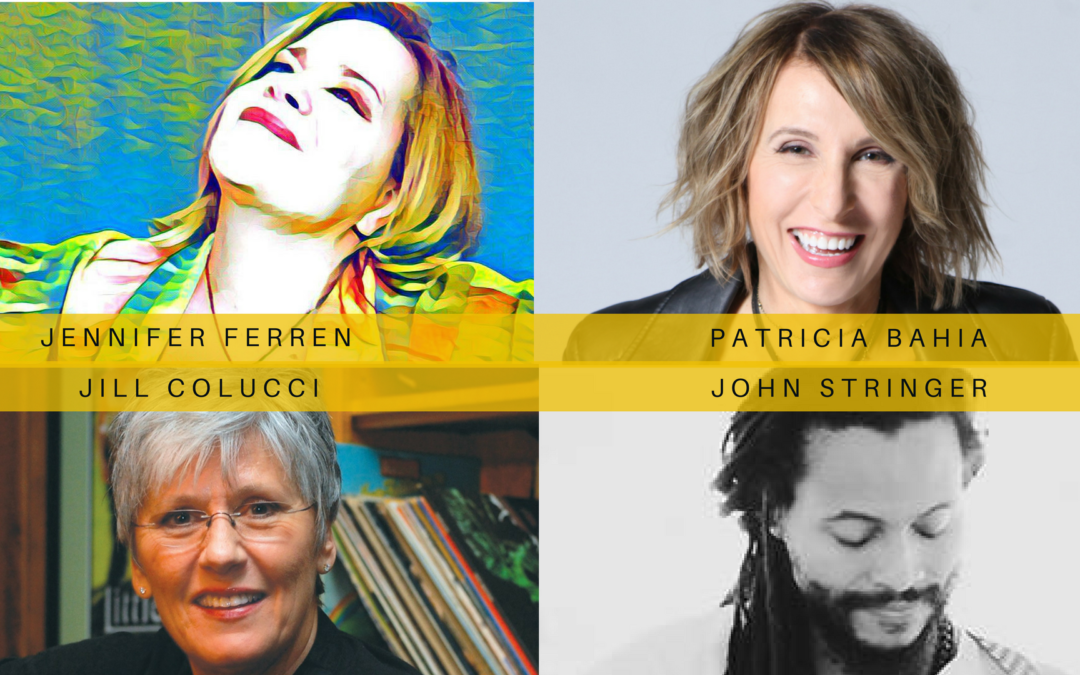 We're sorry, but all tickets sales have ended because the event is expired.

Join Posi Music award winners, nominees and performers, Jennifer Ferren, Jill Colucci, Patricia Bahai and John Stringer for a unique writers in the round style concert that will lift your spirits, open your hearts and move your soul! These four artists are coming together for the first time to share their inspiring songs and the lessons, stories and messages behind them at Trinity Center for Spiritual Living on Sunday, Sep.24 at 7PM.

Jill Colucci is a multi-platinum award-winning songwriter with #1 hits including Song of the Year “No One Else On Earth” by Wynonna Judd, “I’m Gonna Be Somebody” by Travis Tritt,  and “Anymore” which she co-wrote with Travis.   Her songs have sold over 20 million albums worldwide.  Writer and vocalist of ABC’s  “America’s Funniest Home Videos” theme song, vocalist for the ABC TV theme for three years, and vocalist for the Disney Channel theme song, “Celebrate Me Home”, Jill has written and sang on numerous television shows, films and national commercials such as Toyota, McDonald’s, Chevrolet, Taco Bell and Coca Cola, to name a few. So if you watch TV, go to the movies, or listen to the radio, you will surely recognize her soulful voice!

Although Jill has enjoyed much commercial success, she has also experienced great loss in the last ten years.  She refers to this period in her life as, “The Lost Decade.”  During this time, her music changed, her heart was opened more fully, and her songs became the vehicles for her healing.  Her new CD, “Heal My Heart” is an expression of her triumph over loss and the manifestation of her new path in life.   Jill is dedicating these songs to all those who have experienced any kind of loss in their lives, hoping once again to prove that music speaks louder than words.

Patricia Bahia (pronounced ba-HEE-yah) is a positive indie pop singer-songwriter and ovarian cancer survivor living her “bucket-list” life and inspiring others to do the same. Patricia is a two-time Posi-Award nominee and often shares her uplifting music at centers for spiritual living and unity churches and also regularly has her music featured in TV shows, film, and CD compilations.
A former attorney and entrepreneur, Patricia left the corporate world after a successful battle with ovarian cancer fourteen years ago caused her to re-examine her priorities and to discover her “bucket-list” desire to write songs.
Now healed, Patricia has traded legal cases for guitar cases, court appearances for concert appearances, and crafting legal arguments for crafting lyrics. Armed with a voice as smooth as polished stone that’s been through the rock tumbler of life, and an arsenal of sparkling indie pop tunes, Patricia is on a mission to spread love, healing, joy and peace through the power of words
and music–and to inspire others to follow their dreams.

John Stringer is a life teacher, speaker, billboard charting singer-songwriter, healer, and author with a passion for music, community, expansion and limitless love and light. He currently serves as Founder of PolyPlat Records;  Partner at The Flight Foundation, Inc, and a True Collaboration leader at www.bandingpeopletogether.com. As the front man for the indie rock band State of Man, John co-wrote and recorded several albums (including a top 10 best selling Billboard chart hit single) and performed in 11 countries (including tours for U.S. Armed Forces). John’s music has been featured on major network television and he has also appeared in national print ads (Rolling Stone, VIBE, SPIN, Vanity Fair, etc.).

He currently travels extensively, speaking and playing at concerts, workshops, spiritual centers, churches, conferences, retreats and festivals while sharing his uplifting and healing music and message through songs from both his debut solo album, “Limitless Love & Light,” and his follow up album, “Moment to Moment,” along with channeled teachings found in his new book, The Abundance Vibration: A Guide to Alignment.

Jennifer Ferren is a soulful singer, songwriter and keynote presenter based in Atlanta GA.   As an original music singer/songwriter, she performs her special brand of positive/inspirational music around the world. She is a guest artist, motivational speaker & workshop presenter for retreats & churches, as well as a featured concert artist. She can often be heard as a featured radio talk show guest, spreading the word of positive music to a fast growing listening audience.